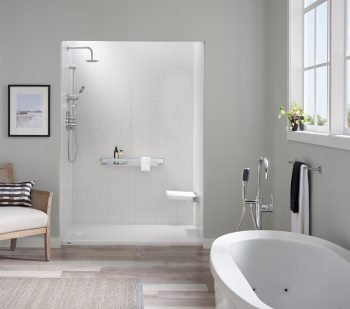 Taking a shower isn’t exciting. In fact, showers are so ingrained in our daily routines, we barely even think about them. But surprisingly, there are a lot of fun facts about showers that you may not have known! Here are just a few of them you should know ahead of your next shower replacement:

The Invention of the Shower

It’s hard to imagine a world without showers, but for those born before 1767, that was their reality. The first shower, operated by a hand pump, was patented in England in 1767 by a stove maker named William Feetham. His contraption used a pump to force water into a vessel above the user’s head. Then, a chain would be pulled to release the water from the vessel.

All About the Water

Here are some facts regarding the most important part of the shower: the water!

Men and women are different in many ways, including how they shower. While more men than women take showers daily, research shows women tend to spend more time in the shower—about 39 seconds longer, to be exact. But what’s one thing universal for both men and women? Singing! In fact, 60% of people sing in the shower. The data is still out on the percentage of people who do it well.

Getting the Best Shower for Your Home

Here’s another shower fact: You deserve the best one possible for your home. Fortunately, transforming your bathroom into a personalized oasis is easy thanks to the expert team at BathWraps. We’ll install a stylish and functional shower replacement that you’ll enjoy for many years to come. Contact us today for more information on our shower renovations and to speak with an authorized BathWraps dealer.