What is the difference between a shower pan and a shower base? 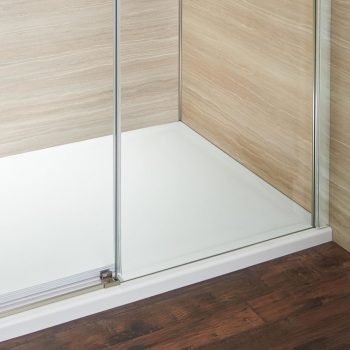 A bathroom renovation can be the perfect opportunity to create the luxurious bathing space of your dreams. With all the confusing terms out there, however, it’s not hard to imagine why a remodel can also lead to a lot of stress for homeowners who are looking to make the best decisions for their goals and budget. If you’ve recently begun a bathroom remodel, most notably a new shower installation, your head is likely spinning with all of the bathtub remodeling lingo out there. “Shower pan” and “shower base,” for instance, are often interchanged when they don’t mean the same thing! So what is the difference between a shower pan and a shower base? Read on to find out!

What Do They Do?

While a shower pan and a shower base both channel water into the drain, there’s one key difference: “Shower pan” is the actual shower floor that you step on, whereas “shower base” refers to the structure underneath the shower itself. Knowing this key difference can help you do further research on the best options for your shower replacement.

What Are They Made Of?

Both shower bases and shower pans are made of waterproof materials, but since they serve different purposes, they require different construction. Since shower bases are a substructure, they’re typically made of cement mortar. And since shower pans are the part of the shower you actually see and step on, they’re usually constructed from acrylic, metal, stone, ceramic, or fiberglass. Different materials come with their own individual pros and cons, so it’s important to consider how much maintenance you want to put into your new shower when deciding on the material for your shower pan.

How Are They Installed?

As a substructure, the shower base is installed beneath the shower pan itself. It’s usually slightly sloped so as to allow water to flow freely into the drain. The shower pan, usually a single-unit piece, is installed atop the shower base. Tiled shower walls or fiberglass panels are usually installed surrounding the shower pan to create a full shower. The shower pan is a visible feature, so it’s important to select options that are built for your aesthetic preferences. Look for manufacturers that allow you to customize your shower replacement so that it suits your wants and needs.

Because of the many plumbing and structural elements involved in a shower remodel, it’s best to entrust the installation phase to qualified professionals. A reputable manufacturer like BathWraps can connect you with dealers that have the skills, tools, and expertise to install your new shower flawlessly—and may even be able to get the job done in as little as one day!

Turn to the Experts

Finally, shower installation terms demystified! There you have the difference between a shower pan and a shower base. If your head’s still spinning with a DIY shower installation, get in touch with the professionals at BathWraps. Our innovative showers are constructed from a premium nonporous acrylic material that is low maintenance, fully customizable, and guaranteed for as long as you own your home! And our products are exclusively available from our trusted network of dealers, so you can feel confident that your base, pan, and every other element of your new shower will be installed by industry professionals. What’s more, installation can be completed in as little as one day, so you can get to enjoying your new shower faster than you would be able to with a traditional bathroom remodel.

Contact BathWraps today to learn more about our shower replacements and get connected with a dealer in your area.